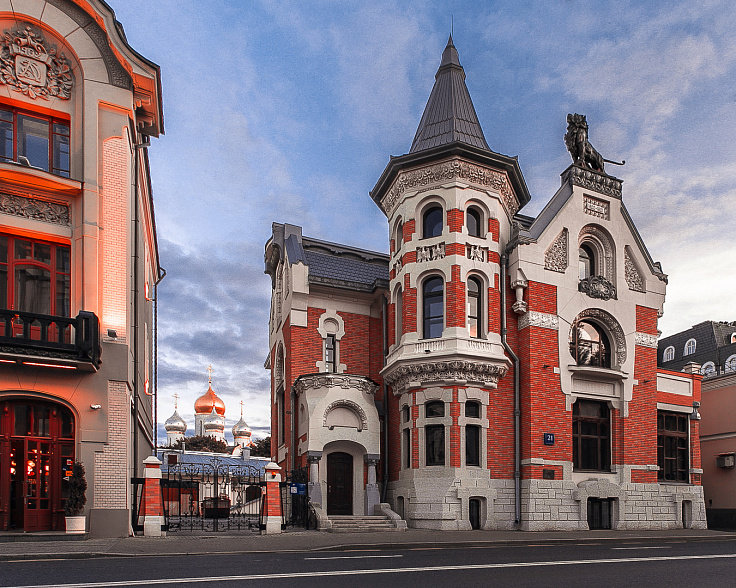 GlavUpDK, an affiliate of the MFA of Russia, has finalized capital repairs and reconstruction of the mansion authored by Lev Kekushev at 21, Ostozhenka Street. It was the first extensive renovation in the building's history.

The mansion of the wife of the celebrated Moscow architect was built in 1903. A gem of historical Moscow, it was designated a federal cultural heritage site and put under GlavUpDK's oversight. The mansion was built in the Moscow modern style; many researchers of the works by Mikhail Bulgakov believe it is "the house of Margarita" described in the Master and Margarita novel.

The reconstruction of the original looks of the building, which has a floor space of more than 600 square meters, began in 2017. Before that, the building accommodated the bureau of the military attaché of the Arab Republic of Egypt. The restoration project was prepared consistent with the Federal Law on Cultural Heritage Sites (Monuments of History and Culture) of Peoples of the Russian Federation. It was approved by the state historical-and-cultural examination board and coordinated with the Moscow department of cultural heritage.

GlavUpDK and specialized entities did a thorough work to reconstruct the building. In addition to the works mandatory for further use of the building – the reinforcement of the foundation and arched ceilings and waterproofing – missing decorative elements were restored in order to return historical looks to the building.

The building regained its historical roofing, resembling the tiling lost in the Soviet period. The roofing was designed by archived drawings and photographs but a modern material, titanium zinc, was used. Also spelter decorative elements of the façade, and missing metal chimney caps were restored to resemble the ones of other buildings by architect Kekushev.

A number of walled-up doors and windows, which remained obscure for years, were opened.

The main staircase of the mansion and its unique metal railing, the central element of the building's interior around which all rooms are grouped, were restored, too.

The metal fence and the gate, which add to the unique ambience of the mansion's facades, were rebuilt.

The return of a lion sculpture, the symbol of works authored by architect Kekushev, to the building's façade in December of last year was a remarkable event for architecture lovers.

The sculpture lost under unclear circumstances in the beginning of the previous century was thoroughly reconstructed on the basis of archived materials. The sculpture placed 15 meters above the ground is strong enough to withstand bad weather but does not overburden the building.

Techniques and materials of the early 20th century were used in reconstruction works. Yet modern technologies of injecting, cementing, and spraying were applied to strengthen and protect mansion structures.

Modern engineering systems and utilities, which will not require repairs for years, have been installed in the building.

GlavUpDK under the MFA of Russia oversees more than 150 mansions in Moscow, most of which are cultural heritage sites or house foreign embassies.

Such buildings are maintained and operated in strict compliance with Russian laws protecting cultural heritage sites under control of governmental monument protection authorities.

GlavUpDK has repeatedly won the Moscow government's contest for the best project of preservation and popularization of cultural heritage sites, Moscow Restoration, for the best organization of repairs and reconstructions.  In August 2014, the GlavUpDK collective was thanked by Moscow Mayor Sergey Sobyanin for its major contribution to the preservation of Moscow cultural heritage sites.

Published
31.10.2018
Thank you, your application is accepted.
You have questions?
We will call you back